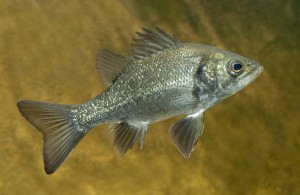 Also known as eastern freshwater perch, black bass, bronze battler and barramundi of the south.  A magnificent fish, the Australian Bass survive and grow well in dams, lakes and impoundments – it is thought that stillwater environments such as these are most likely to produce really large bass.  Bass are often confused with the closely related estuarine perch, however while the estuary perch spends most of its life in the brackish tidal reaches of southern estuaries, the Australian Bass pushes well upstream into purely fresh water and can often be found far inland from the coast.  Bass are aggressive feeders quickly attacking whatever live food presents itself.  They are also hardy, alert and long-lived with Bass known to reach 22 years of age. Australian Bass are highly prized by fishing enthusiasts for their tremendous fighting spirit.  They are also superb eating – the flavour of their succulent white flesh is unsurpassed. 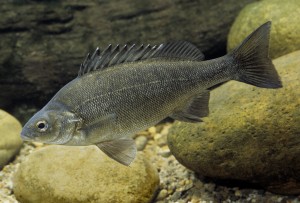 Also known as bream, Murray bream and grunter. The silver perch is a hardy fish which grows rapidly and is excellent for stocking in farm dams.  Specimens up to 3.2 kg are not uncommon although they have been known to reach a weight of about 7.7 kg.  The fish are omnivorous, feeding on both plant and animal life in dams.  They are particularly good for mosquito control.  Juvenile and adult silver perch also readily accept prepared pellet diet.  Silver perch provide good sport – they have a reputation for biting eagerly and fighting strongly when hooked.  As an edible fish they are excellent with tasty white flesh. 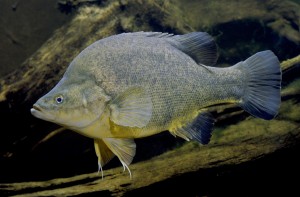 hardy and can tolerate turbid water, low dissolved oxygen levels and a wide range of temperatures.  They live and grow well in dams and farm ponds – golden perch in productive farm dams and impoundments grow faster than those in rivers.  The larvae and young fish feed mainly on zooplankton.  As the fish grow they also feed on yabbies, shrimp, tadpoles, insects, worms and mud eyes.  The fish is long lived and individuals have been aged at over 20 years.  The species grows to over 20 kg but in most cases is caught at less then 5 kg.  The largest golden perch recorded weighed 24.6 kg.  Golden perch can provide good angling, however they are spasmodic biters.  They are of excellent edible quality with white firm flesh. 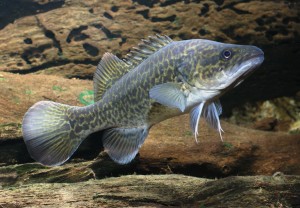 The Murray cod is Australia’s largest and most long-lived freshwater fish.  The species has been known to grow to over 100 kg although it is commonly caught at 2 to 5 kg.  As Murray cod grow, their diet shifts from zooplankton to a wide variety of both vertebrate and invertebrate aquatic organisms.  Older fish feed mainly on crustaceans, bivalve molluscs and fish.  The species has an aggressive and territorial nature and does not mix well with other fish.  It is best stocked into large well-established dams where there is a good supply of natural food, a population of yabbies in the dam being particularly advantageous.  The Murray cod grows slowly and cannot be stocked heavily in comparison to other native fish, however the species may reproduce in dams at about 5 or 6 years of age when they reach sexual maturity.  This can be encouraged by putting in hollow logs, pipes etc, as the adhesive eggs are spawned onto solid objects such as logs and rocks as well as clay banks.  The fish provides excellent angling and eating with the flesh being oilier than that of other native species. 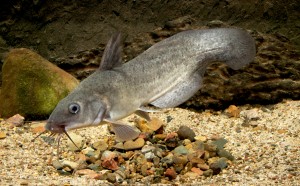 Also known as freshwater jewfish, tandan, dewfish and eeltail catfish. A hardy species that mixes well with other fish, the catfish grow well and breed in dams and ponds.  Freshwater catfish are often confused with estuary catfish and are considered by many to be rather unattractive.  This makes them somewhat unpopular as a food, however they are of excellent culinary value with the flesh being firm white and tasty.  (They should be skinned prior to cooking).  The freshwater catfish is also a good angling species.  The fish is carnivorous, feeding on a wide variety of organisms including insect larvae, shrimps, yabbies etc.  It is also a bottom feeder that appears to be assisted more by odour perception than by sight.

Send Us A Message!

Comments or questions are welcome.